Order everything you need for your shop, event or indoor pop-up - all for delivery within 5 days! 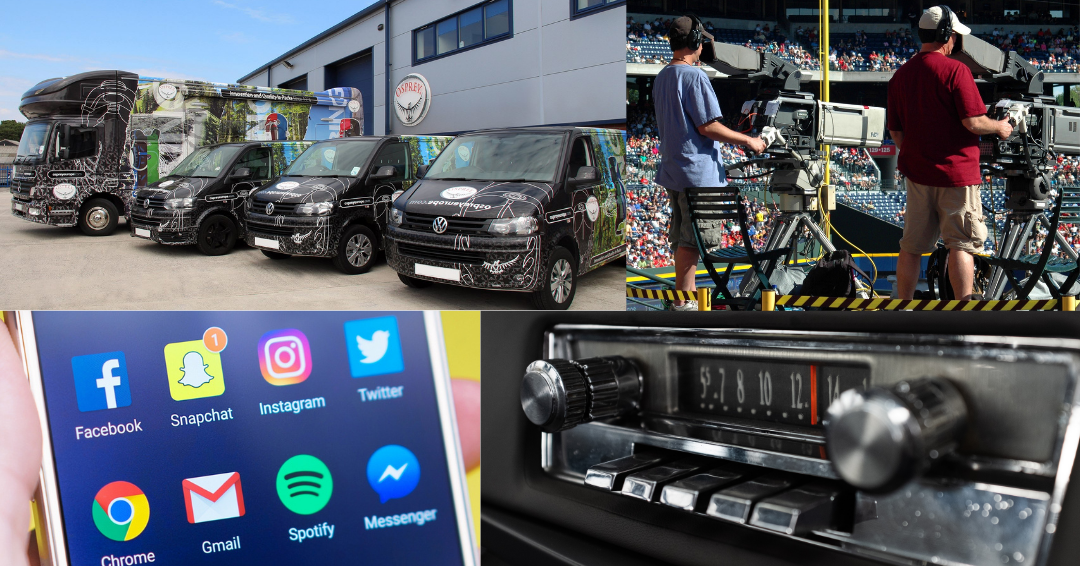 We all love the idea of displaying our branding on company or promotional vehicles, but is it worth it? What is the return on investment (ROI) on a vehicle wrap really? Lets get straight into some numbers.

A single wrapped vehicle, driving intercity, can attract up to 16 million views a year with a vehicle wrap costing 10% of the overall price of leasing and running a van – a mere 87 pence per day.*

That’s sounds great right, but what’s the catch? Well … nothing… no really there is no downside, your vehicle becomes the equivalent of a mobile billboard, promoting you at all times, wherever you go.

We don’t expect you to just take us at our word though, we are a vehicle wrapping company after all – so we must be biased! Price vs impressions or CPM is the most concrete comparable metric across these different mediums, so we will lead our comparisons with these numbers.

Below is the price per 1000 impressions of the forms of advertising covered in this article. For more specific information about the price of a vehicle wrap, check out our pricing guide.

*This figure was calculated by dividing the average price of a wrap (£1,600) by the number of days a good quality vehicle wrap should last (1,825 days or five years).

** Figures taken from speedpro, and 3M.

Digital advertising is popular for a reason, it obviously works, but it requires a great deal of time, expertise and money to make it worthwhile. This is not a problem shared with vehicle wrapping. Obviously design expertise is required to create a beautiful wrap, but the ad itself is passive; it doesn’t require constant maintenance or fine tuning. It just keeps working for you, day and night.

The digital space is also very competitive. Online ads are more like a constant auction, you get seen by X amount of people if you pay X amount. For example, Google will constantly limit your audience in accordance with your budget and spend over time caps. This means that inevitably the fattest pocketbook wins.

This isn’t the case with vehicle wrapping, you pay a fixed price, for which you have the same chance of getting seen as anyone else. There aren’t any bidding wars here, just gorgeous wraps and stunning results.

Reaching a target audience is much simpler with vehicle wrap advertising, partially due to the sheer exposure and partially due to their inoffensive nature. For example, un-skippable ads on online videos are irritating, passing a McDonalds sign is not.

In fact if you are hungry and you pass a McDonalds ad, there is a good chance you will visit the restaurant. This is why the company spends so much on Out Of Home (OOH) ads, nearly $60m in the USA in 2020.

So let’s get specific: how do Google and Social Media ads compare to vehicle wrapping?

At just £2.15 per 1000 impressions, PPC may seem well priced, but you will pay per ‘click’ which doesn’t guarantee quality of the leads coming in.

Consider the difference for example, between someone seeing your ad on the side of Google search, and someone seeing your vehicle on the street. On Google, this person, who may have no interest in your business, simply scrolls past, maybe not even noticing you. 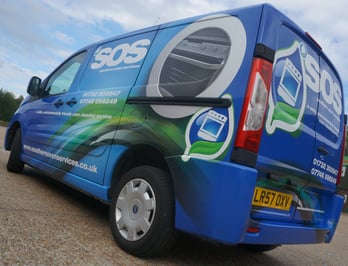 On the street your vehicle has a much higher chance of being noticed, especially if it is wrapped with a high quality and eye-catching design. That makes a much more concrete ‘impression’. This is even more useful if you ply a trade or service.

Someone noticing you parked outside a neighbour’s house can literally see who it is that their peer trusted with their business. If they have a requirement for the same service, you are in their mind, and they can go check with their peer for confirmation of quality.

Heck, even Google themselves use vehicle wraps as part of their marketing strategy. Here is a wrap we did for them to promote the Google Home Mini.

Let’s get down to some hard numbers.

Word of mouth (WOM) is still the most important trust metric that drives business, online and offline. However 93% of WOM brand impressions occur offline, so if you are only focussed on the digital world, you are missing out. In fact offline WOM conversations are 10% more likely to be positive than negative, 10% more credible, and 7% more likely to lead to purchase intent.

The average Click-Through Rate (CTR) on a google ad is 1.9% for search and 0.35% for display, so out of those 1000 people that saw your ad between 3 and 20 clicked on it and 997-980 ignored you. And that’s just the people that clicked on the ad, not your conversion to actual sales. That will depend on your ability to craft a convincing ad and requisite sales pipeline, a difficult task that requires constant attention.

If you spent the same money wrapping a fleet at £2000 a van that’s 7 wrapped vans delivering 112m impressions a year. There is a reason that giants like Sky wrap their entire fleet. With 2,500 vans on the road, Sky's rolling stock attracts around 19 billion views each year. That's around 300 views for every man woman and child in the country!

Can it work? Of course, so can google ads, but again, when we are talking ROI it isn’t even close to a vehicle wrap.

Keep in mind that only covers the cost of the ads themselves. As with Google advertising, social media requires expertise, which means either hiring an individual or team to monitor and finetune the advertising strategy.

The buy in cost for mobile ads is much lower, and the ad is working for you from day 1, without the need for management.

Apart from the oversaturation of digital forms of advertising there is one other major disadvantage we haven’t mentioned: AdBlock. If you aren’t familiar, AdBlock is a browser extension that allows users to control the amount of ads they see.

It only takes a few clicks to avoid seeing any online ads ever again. This is pretty devastating to a digital campaign when you consider 42.7% of internet users globally use ad blocking software.

Marketing pioneer John Wannamaker was famously quoted as saying, “Half my advertising spend is wasted; the trouble is, I don't know which half.”

TV advertising costs roughly three times as much as social media advertising, that’s about £20 per 1000 impressions. It is certainly effective but very costly, especially when you consider advertising packages often run into the tens of thousands. A prime time ad package on ITV costs £43,000 for example. 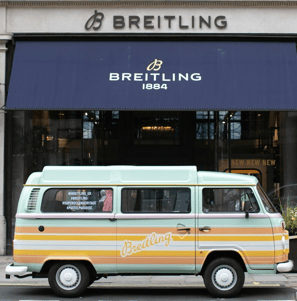 With an average price range of £1500 – £3000, ROI wise vehicle wrapping is far superior. According to the Department of Transport, in 2016 light commercial vehicles averaged 12,811 miles each year and travelled a combined 48.5 billion miles on the UK’s roads. Going by a conservative estimate of 600 views per mile, for each vehicle, puts the total number of impressions, UK-wide, at a staggering 30 trillion!

TV also suffers from the same problem internet ads do: you don’t have to see them. With the rise of services like Sky and Virgin media, consumers can fast forward through ad breaks, drastically reducing their impact.

There is also another issue: TV viewership is declining. In the UK the average daily viewing time decreased from 242 minutes in 2011 to 183 minutes in 2019 – very nearly a whole hour less per day!

This can be attributed to the rise of competing services such as Netflix, Amazon Prime Video and Disney+, all of whom do not run ads.

Radio costs about £6 per 1000 impressions, so once again vehicle wrapping is much, much cheaper. Radio is also one of the most challenging mediums conversion wise, making it difficult to ascertain true ROI.

Radio suffers from the same internet competition faced by television. These days drivers can connect their favourite music platforms, such as Spotify or Apple Music to their car speakers for a more personalised auditory experience. The drop off is particularly high amongst 15-24 year olds, falling 29% between 2010 and 2018.

A 22 year old driving along the M25 is unlikely to hear a radio ad for this reason, but there is nothing stopping them noticing an eye catching van wrap design. Say this van gets seen just 10,000 times each week (a very conservative figure), that’s roughly half-a-million times a year. If just 1% of the people who see it get in touch, that amounts to 5,000 potential new enquiries coming your way each year. Just for driving around.

One other major advantage is that vehicle wrapping can be used in offline and online campaigns, killing two birds with one stone. Known as offline to online marketing, only OOH advertising can transcend the digital and physical world simultaneously.

If you wanted to drive online engagement for example, you could add a hashtag or QR code to the side of a vehicle as part of a campaign, encouraging online interaction with the vehicle in a fun and friendly way. Check out our offline to online marketing guide to learn more.

So which form of advertising should you choose?

We have broken down the benefits of mobile advertising compared to other mediums, the biggest factor being price. Yes we will say it again, vehicle wrapping is by far the cheapest form of advertising.

Founder of Raccoon, a graphics company launched in 1992. Still working hard to help businesses and brands connect with their target market! 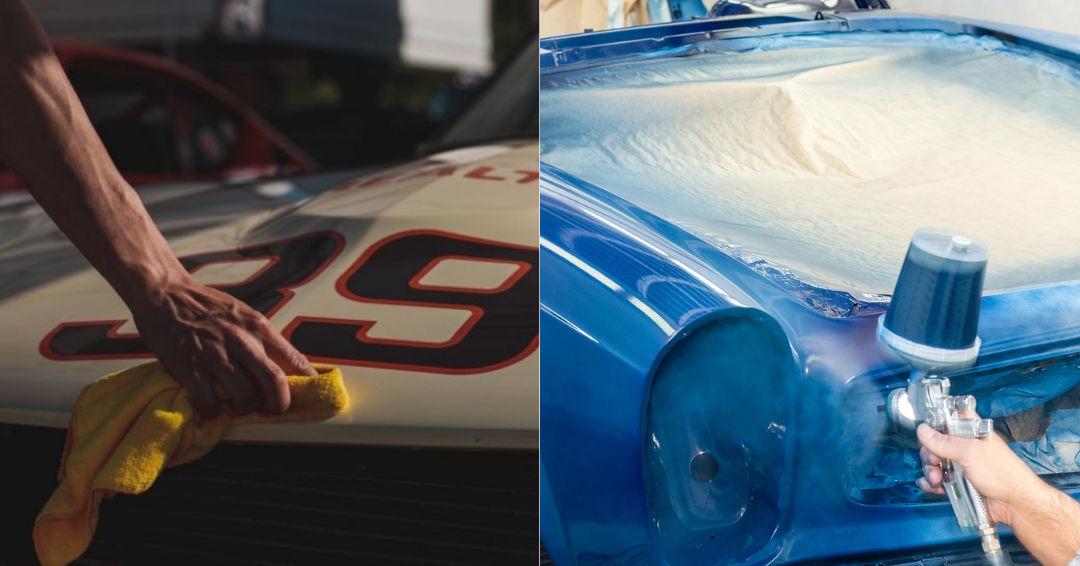 Vehicle wrapping vs respray: which is better for you? 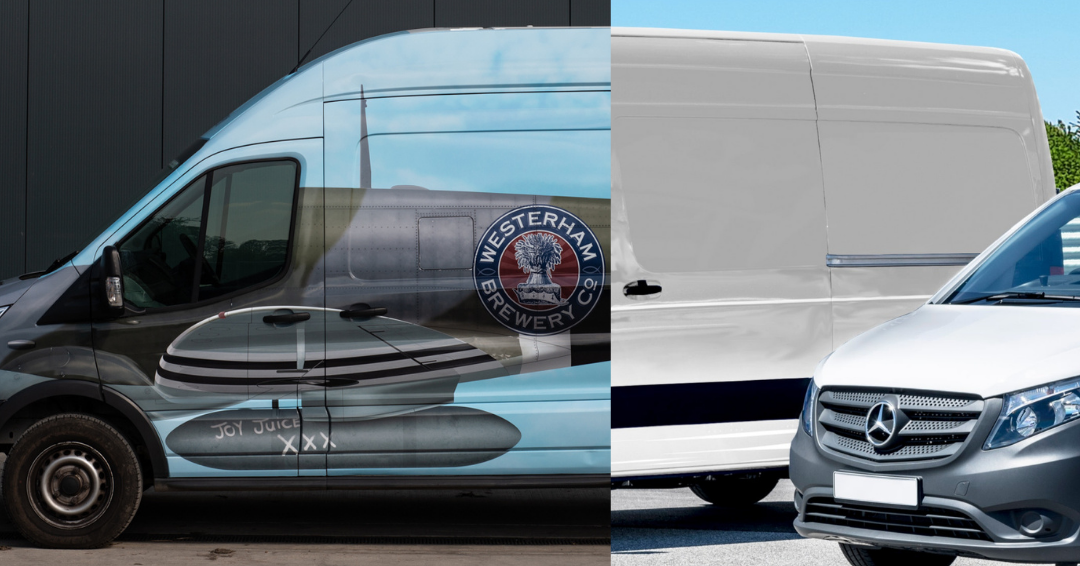 Can I brand my leased vehicle?